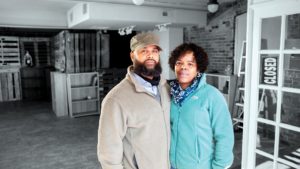 Sieh “Chief” Samura and his wife Leah Samura are opening two dispensaries between them, and will soon launch a delivery business.

Local economies are no different from organizations when it comes to taking stock of their ability to grow, innovate and thrive in lockstep with the times. Much depends on talent within: the employees of companies and nonprofits, the entrepreneurs who define a business community. But a lot also rides on the unique mix of ingredients that both define the local economy in question and play an outsize role in its success in navigating change or crisis. The SWOT analysis is nothing new for anyone familiar with business-school dogma, though its application to our small business community — as it rebounds from a pandemic — is probably a first. What follows is a breakdown of the strengths, weaknesses, opportunities and threats working for or against the region’s small-business owners as they climb back from one of the most economically and socially disruptive events in modern times.

Opportunity: A brand-new kind of business in the Bay State: In 2020, Massachusetts cannabis regulators finally set up a framework for cannabis deliveries, after years of urging from dispensaries, customers, and advocates. A select few groups have now gained access to the delivery licenses for the first time this year, making them eligible for the market opportunity it affords.

Chief had run a private cannabis club over five years ago, operating as a caregiver to certified medical cannabis patients and delivering product to their doors.

The Department of Public Health, which oversaw medical marijuana at the time, frowned on the practice that seemed to skirt the state’s rules, closing the delivery business. Yet in the years since, the Samuras have worked to open separate recreational cannabis dispensaries in Cambridge. They also hope to operate other businesses out of a space shared by Silver Therapeutics in Roslindale called City Farm and potentially out of a warehouse in Boston.

The state is now taking applications for the courier model and is set to release the application for the warehouse model within weeks. One cannabis company can control up to two delivery licenses.

For a three-year period, delivery licenses are available only to groups enrolled in the state’s social equity program and economic-empowerment program. Qualifications for those programs range from people who have lived in an area disproportionately affected by the war on drugs, to applicants who have received or are the child of someone with a drug conviction.

Both Chief and Leah are economic empowerment applicants who see delivery as an add-on to the dispensary businesses they are building. The courier license would allow them to work with other dispensaries, but would also allow them to deliver out of their Cambridge storefronts while most neighboring recreational dispensaries in nearby towns can’t. The manufacturing company the pair operates jointly, called 612 Studios LLC, has secured a type of pre-approval for the courier license, known as pre-certification, in anticipation.

But they see the wholesale and warehouse model as a larger opportunity still. In addition to potentially operating a courier license Roslindale, the pair hope to open a warehouse in Boston, and are just starting to look for a location.

“If you have your own stores, you have an advantage,” Leah said. “There is a bigger business.”

With the opportunity finally here, they say it’s long-delayed and not as robust as advocates initially hoped. The state’s regulations involve body cameras, multiple drivers, staunch security measures and more — all of which presents an additional cumbersome burden to the business, Chief said.

From Chief’s perspective, delivery only makes sense with the addition of other businesses, and neither he nor Leah are dropping their dispensary plans to chase the new market, even as they prepare themselves to move into it when the timing is right.

“I’m someone who comes from this stuff. I see it differently than others. I know how hard it is to do safe home delivery. It’s very different,” Chief said. “I look forward to competing like that. I see the environment … but I’m only willing to do it when it’s right for me and us.”