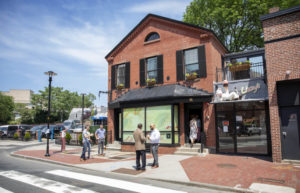 The store on Church Street in Harvard Square which Leah Samura plans to open this fall as the Yamba Boutique. (Robin Lubbock/WBUR)

On a sweltering morning in Harvard Square, Leah Samura strode through the future home of a recreational marijuana shop she plans to open this fall and marveled at the irony of the location: The store where she will soon sell legal pot was once a police station.

“To be a Black woman in Harvard Square with a cannabis shop that used to be a police station is just an amazing opportunity,” Samura said.

Launching her store, Yamba Boutique, has not been easy. Marijuana may be legal in Massachusetts and many other states, but a federal prohibition makes banks wary of issuing business loans to cannabis companies.

Democrats and Republicans in Washington increasingly agree it is time to legalize marijuana at the federal level; the trouble is lawmakers don’t see eye to eye on how to do it. 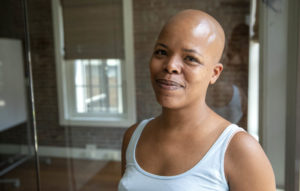 Leah Samura in the Harvard Square building which she plans to open this fall as the Yamba Boutique. (Robin Lubbock/WBUR)

Entrepreneurs caught in the middle of this debate often have to get creative. Samura and her husband, Sieh — who is leading the plan for a second Yamba location, in Cambridge’s Central Square — have managed to pay some bills by supplying other retailers with a cannabis product they developed.

“It is a cannabis-infused personal lubricant,” Leah Samura explained. “It was designed to really help women deal with some of the issues that we have down there.”

The product’s sales are not enough to cover all the costs of getting a business off the ground, however, so the Samuras turned to a private investor named Sean Hope. Though Hope is a successful attorney and real estate developer, the new cannabis company is a stretch even for him.

“I have essentially leveraged my family’s worth in real estate to be able to participate,” he said. “There’s tremendous risk.” 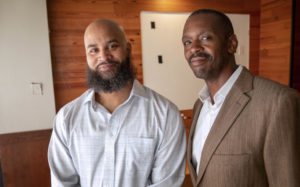 Lifting the federal marijuana ban could mitigate the risk by easing bank lending.

It also could bring the law in line with public opinion. In a recent Pew poll, 91% of American adults said marijuana should at least be legal for medical use, and 60% backed recreational use. Plus the vast majority of states have legalized medical or recreational marijuana already.

Yet Democrats and Republicans are in a stalemate.

“All we want is strictly to legalize it,” said Tom Mountain, vice chair of the Massachusetts Republican Party, which supports a relatively straightforward legalization proposal by GOP congressmen Don Young of Alaska and David Joyce of Ohio.

“Now, the Democrats, on the other hand, they want to add a surtax to it,” Mountain continued. “And then they want to divert the money to this program and that program. It’s so typical. It’s really so typical.”

A Democratic bill called the MORE Act includes clearing some criminal records and funding social justice efforts with a 5% to 8% sales tax. MORE stands for Marijuana Opportunity Reinvestment and Expungement.

“I think it confronts the injustices of the past and charts a better path forward and gives people back their lives,” said Rep. Ayanna Pressley, a cosponsor.

Sieh Samura worries that is unlikely to happen without the special provisions in the MORE Act.

“Equity considerations for a fair market and the long history of cannabis prohibition and all the people that have been harmed there have to be part of the equation or else you will not be able to build a healthy, sustainable market,” he said.

Still, Congress could legalize cannabis at the federal level and leave it up to states to launch equity initiatives, if they see fit. Some, like Massachusetts, already have such programs.

But a bipartisan deal does not appear imminent. The House passed a version of the MORE Act last year, only to see it stall in the Senate. The same could happen again.

This segment aired on June 28, 2021. Click here to read the article